It dawned on me at the start of the Double Down Challenge, that I’ve never been to North Posh. So, I beep boop bopped myself onto the Q calendar, and checked with Site Q/Beast Catfish to confirm he actually needed a Q. He agreed, but asked that I favor the run. Catfish explained to me that he’s trying to focus NP on cardio/running. That sounded fine to me, but having never been there I wasn’t sure what I’d do. So I did a little scouting beforehand, and found a nice little pond down yonder from the startex with a path around it and a parking lot nearby. Figured that would make for a nice little set.

We started the workout like any other. Disclaimer, then a hardish jog to the parking lot near the pond/lake. It was there that I had stashed the workout board, lantern and good time sound machine. Before I broke any of that out, we did this….

Sufficiently warm, I got out my stuff. Here’s the deal. To the delightful sounds of the Beastie Boys Station on Amazon Music, Partner up. P1 starts the first set of exercises on this board: 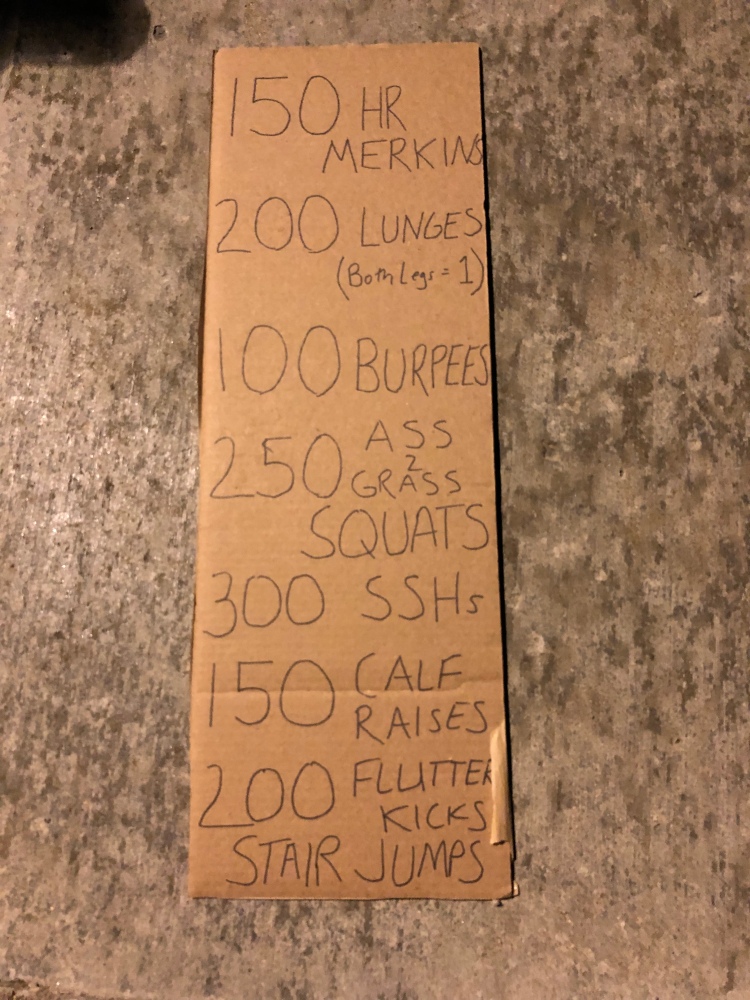 Partner 2 starts a hard run around the pond/lake, which is about .2 miles. Then, flip flop till done. I pointed to the stairs over yonder, which are long and horrible. Then, things got interesting. Not impressed with my scouting or plan, Little Jerry said, “Nah, we can’t run that path. The lake gets up and the path is no good.” I responded in my normal laid back, nonchalant way, “We’re going to run it, or you can run yourself on home.” Don’t worry, dear reader, we’re friends and he knows I’m a dick.

With the complaint department closed, we started in on this. We got to calf raises before Kilo reminded me that we had to leave. By this point, I was in short sleeves and was lacking oxygen. Woof.

We ended with a hard run back to the flag the long way, where we circled up for COR, NOR and COT. Announcements included the Banquet and survey, which you should come to and fill out. I hear Captain Infact-O, which is really just F3’s Darkest of All Helmets, is coming and will unmask himself. Also, the 4 Churches event continues this week at St. Matthews Baptist. I took us out by asking that each of us during our day take a second to dig deep — like we did at some point during today’s workout — when things aren’t going our way to put on a smile and power through. Just like you had to to get to the end of this Backblast.