For those that aren’t aware, my son Samuel passed away on March 15, 2018 after a long battle with heart disease related issues.  The battle was a long hard fought battle for him as well as the army of people that helped us during those times in caring for me, the M, Samuel, my other two kids and various commitments of life.  A little bit of background, but Samuel was 2 when we adopted him from China and he was almost 4.5 years old when he passed away.  Of that 2.5 year period that he was with us, we spent almost a year as an inpatient at, or daily visits to, Cincinnati Children’s Hospital.  If you want more background, the M posted a daily post in for Heart Month in February 2020 on Facebook – feel free to find me there and you can follow on some of the journey and battle.  Or, just ask me – I’m very open about it because to me it’s part of his legacy and my healing.

Last year I picked up the Q at The Vets on March 15, 2019 – the one year anniversary of Samuel’s passing.  But, instead of mourning and grieving with the PAX I decided to make the day one of celebration.  Because, we all have something to celebrate and be thankful for – and even in times of sorrow and pain I can’t say that I’m not in the same boat.  For Celebration Day 2020, March 15 fell on a Sunday – so, next best thing was to Q at my home AO on March 14, 2020 at The Nest.  Because, those guys know me best.  Because, those guys get me.

As you all know, I love Qing.  It’s the only time of the day where I can tell someone what to do and it actually happens.  That never flies at work or at home.  So, I was stoked in the days leading up to it.  I was stoked in the hours leading up to it.  I was stoked in the minutes leading up to it [just ask the pre-Nest runners…my pace was a bit more feverish than normal].  So, with a little set-up time upon returning from the pre-run, it was 6:55am and the parking lot was pretty full already.  But, then 7:00am rolled around and I realized really just how crazy it was because the circle kept on getting bigger and bigger.  Everyone, well, except Cochran [see below], donned in their red shirts [more on that later].

Time was called.  Disclaimers provided.  Everyone was in agreement that I was not a professional and that they should modified as necessary.  We welcomed two FNGs to the group and I advised them to seek instruction or demonstration as needed. 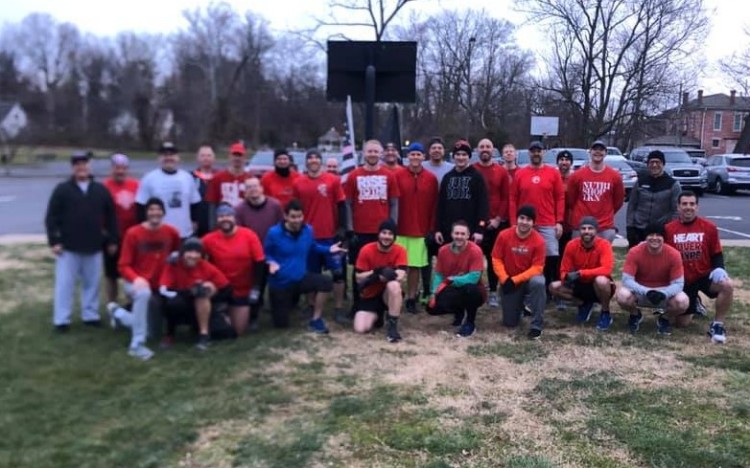 We started with a mosey to the front parking lot and completed the standard Jolly Rancher warm-ups, which included:

We then did a quick count off – 31 PAX.  According to Pelican, Nest Site Q, this was a record setting day for The Nest.  As the great Yoda would say:  Humbled, I am.

Then, we continued the mosey to the back to the coupon cache and then over to the back parking lot to get busy.

I love this exercise for some reason.  I’ve done it in groups of partners or in groups of 3.  However, 31 is a prime number – damn.

So, we partnered up and I was odd man out so I crashed the Cochran / Airplane party as a third wheel.  Goal here was PAX 1 farmer carried two coupons to the far island and back while PAX 2 dropped and did 10x merkins.  Then, PAX 2 caught up with PAX 1 for a switcheroo.  Rinse and repeat-o a few times until 2 full laps around the far island and back.

I asked and got confirmation:  great times were had by all.

Never seen this one done, but always see it on the Exicon.  And yes, I always ignore it on the Exicon because it sounded horrible.  I’m here to confirm:  it was horribly awesome.  This is basically a Dora 1-2-3, but instead of a gentle mosey to the other end it is basically a suicide mosey.  PAX should be glad I also elected to omit the suggested burpee at each line!

Some of my set-up time was to throw down a few LED road flares to mark the lines for the suicides.  Captain Crunchberry showed me these at The Inferno and I thought they were worth the investment.  Rural King is where I found mine.  If anything, even if the workout sucks, I was sure to get some bonus credit for the pretty sweet look it makes in the morning with a bunch of rotating LED flares going, right?

So, Doracide it was – PAX 1 did the suicide while PAX 2 started on:

Woof.  This sucked much worse than expected.  But, it was great to see the PAX help each other out so that we all finished.

Returned the coupons before Thang 3.

Since our arms were toast, we moved straight to legs.  Nothing beats Lt. Dan if you want to work your legs.  Pretty simple:  1x jump lunge [both legs is 1 rep] to a 4x squat – and then increase in the same 1:4 ratio until you’re at 10x and 40x.  Mumble chatter was at its highest peak here.

Time was nearing the end so I had to call a stop when we finished 8:32.  Because we still had Than 4 to complete.

As I told you earlier, I have a lot to celebrate.  And, each and everyone of the PAX I was certain had something else to celebrate.  Problem is, they may be too humble to share so what better way to force them to share.

So, the Celebration Merkins start as a big circle and everyone in the plank position.  PAX to my left starts and they announce what they’re celebrating.  Once they’re done, we did a merkin – and then the next PAX goes.  We went all the way around the circle.  Celebration items included items such as:

Then, it was my turn.  I did this much more eloquently at Celebration Day 2019, but as I said I have a lot to celebrate and my mind was a bit jumbled today.  But, I gave several items so the PAX did a merkin for each one:

After that, we still had time to spare.  So, we kept moving.

We finished 9:36 and 10:40 reps.  This way nobody all those with OCD could go home knowing we didn’t short-cut it.

Can’t even remember what we did here.  I started with something, then we went around the circle for about 5 or 6 other PAX who led in some core work.  We ended with Mama’s Boy’s pickle pounders, which later was acknowledged by our FNG, OSHA, as being some very impressive ones…he definitely took note.

Time was then called.  Thankfully.  I was beat.

During announcements, Pelican stepped up and informed me that over the past week the PAX started collecting money to provide a donation to the American Heart Association – specifically to the Super Samuel team.  $600 was raised in merely a few days.  Amazing.  The red shirts everyone was wearing [even those pesky UK fans] was to honor their mission of preventing and battling heart disease.  You guys rock.

This is how leaders lead.