In September of 2017, Face made a flyer for what is now known as the Club Paradise AO in Sea Grove Beach, Florida. This is where a number of us would vacation for Spring Break…in 2018. Look, we were excited.

Fast forward to this morning. YHC couldn’t sleep, so I woke up at 4 and walked up to the site to drop of Val and the flag. We had a number of HCs coming in for the workout and YHC wasn’t sure the directions were good. I figured it’d be impossible to miss an American Flag painted shovel flag flying an American Flag and F3 Flag planted in the ground. Oh, and Val, you can’t miss the 60lb sandbag Q.

The rest of the crew got up at a normal time and we moseyed up the way to the flag to see who all would show. And show they did. A great Pax of Louisville, SC, Atlanta studs, and Gepetto brought a FNG (who’s an actual real boy and not a wooden puppet).

I got stuff to do and things to imbibe so this will be short.

COP: Mosey to the edge of the ocean for these all IC 20x

Merkin waterfall 10 down to 1 with the same number resting in plank between.

Mosey over to some cones that I put out. Yes, I travel with cones.

Mosey back to the water’s edge. All pax line up shoulder to shoulder. Pax on end grabs Val and calls an AMRAP exercise and then runs with Val counting to 50 in his head and back. If Ocean Swim is called, all Pax must swim and then the calling Pax takes his run with Val. YHC went first and called burpees. I can’t remember all we did, but here’s a smattering: Merkins, LBCs, Rosalitas, gas pumps, bluff hikers, SSHs, T merkins (full release), American Hammers, Abe Vigodas (of course, right when the ladies walk by. SMH)….annnnnd an awesome call by Zartan for OCEAN SWIM! Yep, it was 60 and the water was chilly and maybe not everyone did it (modify, as needed, right?). But for those that did, it was glorious. Welp, it was until YHC dove in and as Waterboy said, it looked like an adult diving into a kiddie pool. Hell, I almost Face’d myself, right Face?

This set was tough, but fun. Good mumblechatter and lots of laughs.

We finished by taking the Merkin ladder back up from 1 to 10. This is mumblechatter killer.

COR, NOR, welcome FNG Cream of Wheat. There’s a story that Gepetto (CoW’s brother) wouldn’t tell us that involved oatmeal. I’m pretty sure he American Pie’d some oatmeal, or at least that’s what I’m going with. Anyway, we got to CoW after some discussion. It’s a strong to quite strong name. Announcements included the two workouts upcoming Wednesday and Friday. Zartan and Face Q’ing, respectively.

Intentions for all the traveling Pax to be safe. YHC closed us out in BOM with some words and suggested we be patient this week. Patient with our families, friends and strangers. Humbled by this crew. Who gets up this early to workout with strangers you’ve never met? Just a group of helpful not-firefighters that can’t read so good.

Thanks to the lovely older lady who took this picture and filled up my phone with 70 others.

CI out to wrangle kids and practice patience. 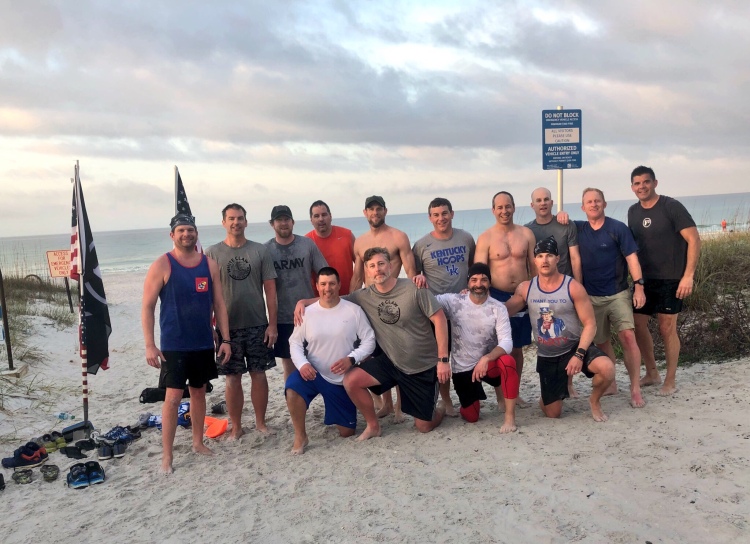