Posting at different sites during the week, I heard how tough the Ruck was going to be or was expected. Maybe that was because of the disclaimers I put out in the weeks leading up, “November Ruck will suck” or something like that? I also wondered if anyone would show or if I’d be rucking by myself. The HC’s came in fast during the week and my fear of walking alone through the Park eased. Okay it wasn’t really fear it was more the thought of how long 3 hours alone would feel.

As Friday arrived, I was still not 100% settled on the route and the PT we would complete. In fact, the route changed during the Ruck because the PAX had covered some ground and we needed to get back.

Weather – warm 42 degrees with temps dropping through the evening. YHC had a weinke filled with warm up ideas, so temps were not going to be a problem all night.

StartEx – Seneca Park Basketball courts. Arrived with Devitto about 8:15. With only a couple of PAX in the parking lot milling around, I became nervous that the HC’s were merely a rouse. No time to worry about that now…get the coupons out and over the B-Ball Courts to be waiting for PAX upon arrival.

Headed back to parking lot and milled around as PAX rolled in.

8:30 sharp and we head to B-Ball courts. YHC said a few words about how we would do some hard things tonight and that we should keep in mind the fight that several of our F3 brothers are facing each day regarding their health. With that we circled up.

Feeling sufficiently warmed up we headed out to Old Cannons Lane. Just beyond the I-64 overpass is a long hill headed toward Bowman Field. Dropped the coupons at base of hill, partnered up. Partner 1 ran up the hill (3 street lights) then 25 lunges and ran back down to Partner 2 who was holding Al Gore. Rinse and Repeat 2X. PAX were given a time frame to hit…10 minutes for both partners to get through. Heart rates were sky rocketing and the temps remained in the low 40’s. YHC was feeling way over dressed!

Old Cannons Lane is really busy for an OLD street. One confused passerby asked if we were exercising. We of course agreed we are against Top Golf too. 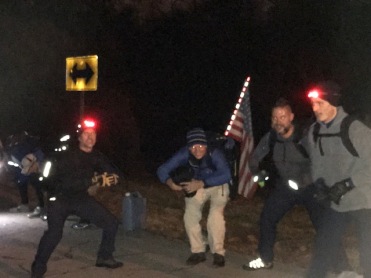 By this time it was clear Maize and Miyagi were not joining us. Oh wait they were calling Alexa. I image the call went something like:

“Alexa, I need to find the F3 Louisville ruckers”

“Miyagi, have you lost your mind? You are 20 minutes late and the Q’Dre will add penalties to the whole PAX. Joining up at this late hour is not very smart.”

“You’re right Alexa, Maize and I will peel off on our own for an Uber based ruck. You’re the best Alexa”

The PAX grabbed the coupons and headed to Big Rock Park. Along the way, Ice Man claimed to have dropped a glove. The PAX kept moving. Concerned Ice was trying to make a break for it, YHC stopped the PAX to help Ice “find” the glove. It was “found” in the dark in less than 60 seconds. HMMM!?!

Onward we continued. Once in Big Rock Park’s parking lot there were several cars. One in particular was a white Tauraus where it appeared the occupants were partaking in some recreational cannabis. Assuming that was the case, and I’m sure it was, they must have thought they had a great strand and were hallucinating to see 16 PAX with headlamps and backpacks. We carried on to the pavilion for some PT. 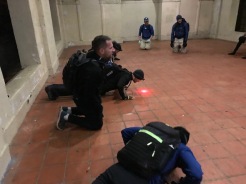 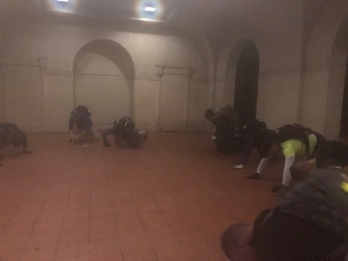 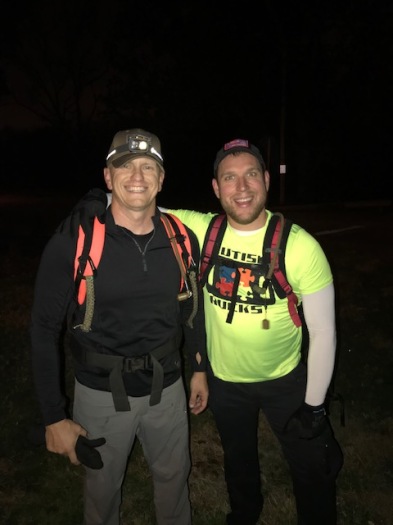 Next exercise partner up 25 merkins while partner holds plank. Rinse and repeat 2Xs. Since there was a lot of moaning going on as a result of the merkins, YHC decided time to pay the penalty for missing the 10 minute cut-off. Two more rounds of the 25 merkins / plank. Following this fun we knocked out more thrusters and big boy sit-ups.

PAX headed back to parking lot. YHC stashed the M’s mini-van loaded with more coupons in the lot. On cue the back hatch opened up and the PAX all picked out coupons. Our dope smoking friends bugged out and turned themselves in at the Louisville Police station on Douglas (may or may not be true, but sounds good to think we positively impacted some youth).

Headed out towards Barret Hill. YHC was looking for the park on top of Barret Hill. It’s really dark and YHC did not spot the park. PAX continued on to Hogan’s Fountain. PAX counted off 1 / 2. Challenge 1’s vs. 2’s. Challenge was to get all gear over the swing set the fastest without throwing the gear. Team 2 was number 1 this night and selected a penalty for Team 1. 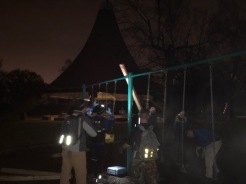 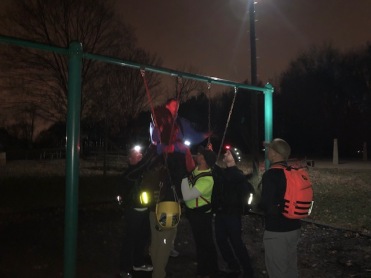 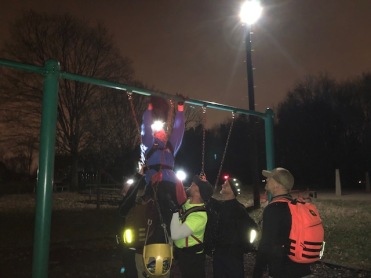 Grabbed the coupons again and headed down Hogan’s Fountain hill toward Daniel Boone statue. YHC decided to take the short cut and avoid a long hill. From there headed back to Big Rock Park. YHC was tired of the coupons so all were dropped in the M’s van and PAX headed back to toward B-Ball courts.

YHC marched the PAX past their cars and never looked back. The point was to make the last mile seem awful and it was a success. Mentally it’s easy to fall in the trap that we just need to get to a point and then everything will be fine. PAX headed to Breckinridge Lane where we circled for COT before heading to Molly Malones!

I’m always honored to Q and this was no different. It’s a humbling experience when guys give up their free time to come get better!