I’ve really enjoyed the heavy workouts.  Despite the drive I enjoyed going out to the Vet for those beatdowns and I attended a couple at St. Pats.  So, I was obviously excited when talks began about having one at the Mutt.  A lot of hard work has been put into getting it going and getting fun toys.  That being said I wanted to think outside the box and do something a little different.  I wanted to plan a workout without the heavy equipment and the circuit.

I’ve always liked doing Jack Webb/Lt. Dan work.  Maybe it goes back to my first post where we did 1:4 Box Jumps/Dips. I enjoy the sneakyness of it.  The first few reps are generally easy but by the end you’re absolutely smoked.  I planned this as a series of Jack Webb inspired exerices but instead of working our way to 10:40, I set a timer of 4 minutes and we knocked out as many as possible.  With a 30 second rest in between.

We started with a quick warmup to get the shoulders, arms, and legs loose and did the following: 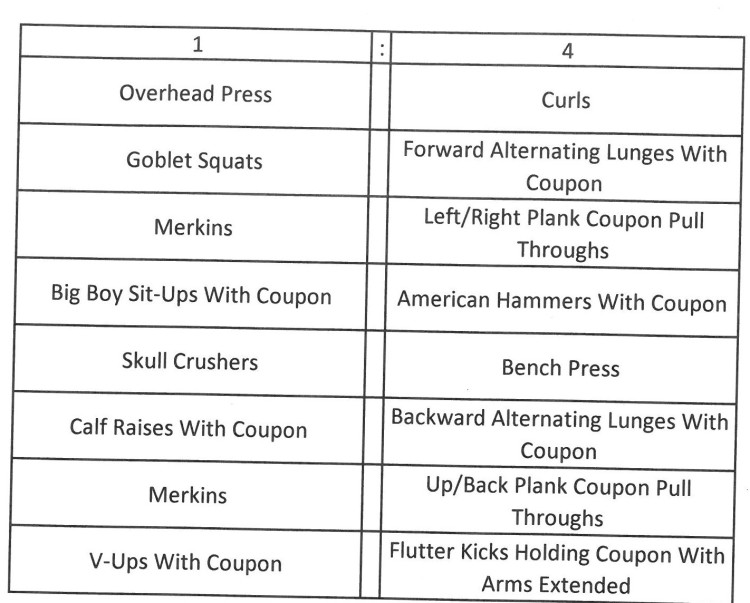 Afterwards we gathered for Name-o-rama, announcements, and intentions.  In the COT the PAX brought prayers for loved ones and we took time to reflect on some of the small things in life and trying to bring happiness to those around us.

It was great getting ITG. If you haven’t been to the Mutt for a Heavy, I highly recommend it.  We have real HIMs in the not too distant future signed up to Q.